Apex Footwear Limited and Edison Footwear Limited have received the ‘Green Factory Award 2020’ in recognition of its improved green efforts to protect the environment and contributions to address the impacts of climate change. 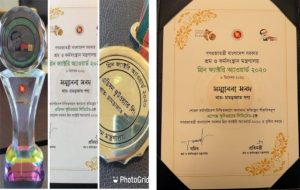 For the first time, the government has recognized 30 companies from six sectors with the Green Factory Award for maintaining a safe and decent work environment, use of environmentally-friendly technology and efficient labor force.

On behalf of Prime Minister Sheikh Hasina, who participated in the function as chief guest through video conferencing, State Minister for Labour and Employment Monnujan Sufian distributed the awards on Wednesday as part of celebrations marking the birth centenary of Father of the Nation Bangabandhu Sheikh Mujibur Rahman.

Entrepreneurs say the award will help enhance their image, encouraging other companies to create green factories.