2020: A dark year for the footwear industry but better than the worst forecasts

In 2020 footwear production and exports fell by 15.8% and 19% respectively. Data are taken from the World Footwear 2021 Yearbook just released by APICCAPS, the Portuguese Footwear Association. Previous forecasts were gloomier, and the World Footwear Experts Panel had pointed to a drop in global footwear consumption in 2020 of more than 20%. Final numbers for 2020 in the developed countries of Europe and North America are in line with such expectations. However, Asia and less developed countries outperformed expectations thus supporting a lower plunge in the global footwear industry.

Footwear production down by 15.5%. Growth accumulated over a decade wiped out 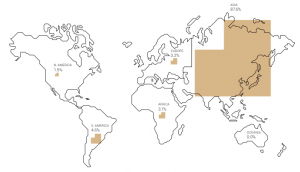 The COVID-19 pandemic severely hit the footwear business with global footwear production in 2020 falling by almost 4 billion pairs over the previous year. Production fell by 15.8% in 2020, wiping away all the growth accumulated over the last ten years. The impact of the pandemic was widespread and, at an aggregate level, did not significantly affect the geographic distribution of footwear production. Asia still accounts for almost 9 out of every 10 pairs of shoes manufactured worldwide and indeed increased its share by 0.2 percentage points. Africa also marginally increased its share of the world total at the expense of North and South America, with Oceania playing only a minor role in the industry.

Asia accounts for more than half of global consumption 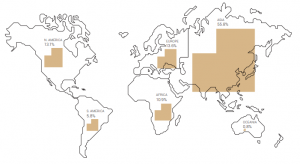 COVID-19 had a stronger impact on footwear consumption in the advanced economies of North America and Europe than in other parts of the world: the gap between the average per capita consumption of footwear in North America and Africa fell from 4 pairs in 2019 to only 2.8 pairs in 2020. Consumption per capita also fell strongly in Europe and Oceania, but much less so in Asia and South America. Therefore, the geographic distribution of footwear consumption in 2020 was closer than ever before to the distribution of population: Asia represented 55.8% of the total consumption; Europe 13.6%; North America 13.1%; Africa 10.9%; South America 5.8%; and Oceania 0.8%. Whether this is a structural change in consumer behavior or whether per capita consumption in advanced economies will rebound once the pandemic is overcome is a major question for the industry’s marketeers.

The COVID-19 pandemic disrupted international value-chains leading to a reduction of the percentage of production exported from 62% to 59%, i.e., 12.1 billion pairs. Asia is the origin of most of the footwear exported but its share of the world total has been slowly declining over the last ten years, and this trend continued in 2020. The same is happening with every other continent but Europe: Europe’s share of world exports has increased by almost 4 percentage points since 2011. In this decade China’s share of world footwear exports fell by 12 percentage points from 73.1% in 2011 to 61.1% in 2020. At the continental level, this was offset by the rise in Vietnamese and Indonesian exports which grew from 2.0% and 1.6% of the world total in 2011 to 10.2% and 3.0% in 2020, mitigating Asia’s drop in exports. Also on the rise, Turkey climbed one more step this year to become the world’s fifth largest exporter, close behind Germany, which occupies the 4th position. Germany has also shown strong performance in the last decade, overtaking Belgium and Italy as Europe’s largest footwear exporter. This year Spain reclaimed position among the world’s ten largest footwear exporters 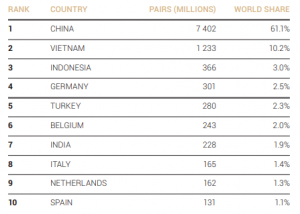 The World Footwear Yearbook is a comprehensive report that analyses core trends within footwear sector around the world. The aim of this publication is to understand the position of the relevant countries within the footwear industry in terms of different variables (Production, Exports, Imports and Consumption) and evaluate the strategic positioning of the different sector players.